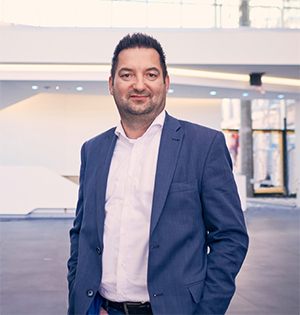 In the foyer: Christoph Graumann, Head of Corporate Real Estate & Workplace Services Germany and his project team managed the centralisation of the Bonn and Cologne locations and the implementation of the new working environments on the Zurich Campus 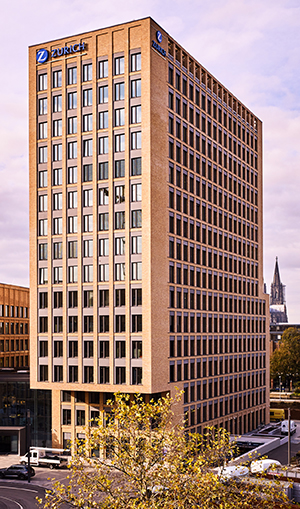 THE ZURICH CAMPUS IN THE MESSECITY DISTRICT OF COLOGNE IS A NEW BUSINESS LOCATION FOR THE ZURICH GROUP GERMANY. THE COLLECTION OF THREE NEW BUILDINGS ON THE RHINE ILLUSTRATES THEIR PIONEERING ROLE IN THE INSURANCE INDUSTRY. THE MODERN WORKING ENVIRONMENT FOR 2,800 EMPLOYEES ENCOURAGES INCREASED EXCHANGES AND QUICKER DECISION-MAKING PROCESSES. THE OFFICE FITTINGS HAVE TO SUPPORT AGILE WORKING METHODS AND KINNARPS WAS SELECTED AS A PARTNER FOR THE PROJECT.

By merging the previous business locations in Bonn and Cologne into a new corporate headquarters, Zurich is taking another step into the future of the new working world.

The 2,800 employees in the Rhineland have now been united under one roof and work in state-of-the-art conditions, just like in the location in Frankfurt am Main. Innovative room concepts have been developed here that place communication at the forefront. The entire concept was planned and designed by furnishing experts, including those from Kinnarps, with close involvement of the works council, the change team and of course the Zurich employees themselves.

The buildings on the Zurich Campus are named after three oceans: Atlantik has 16 floors, Pazifik has seven, and in the smallest building, Indik, three floors are used by Zurich. The naming concept was developed during an internal competition and also runs through all areas, including the different floors and meeting rooms.

From the trainees right up to the CEO, everyone works openly with their teams. Offices for one, two or three people are a thing of the past. Although everyone has a Teambase, mobile laptops can be docked in any of the many special areas throughout the building or connected via Wi-Fi.

Flexible and agile working is made possible and encouraged thanks to a FlexWork concept for all employees based on their needs. 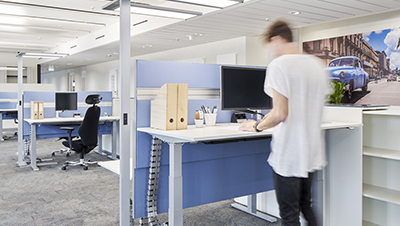 The open space concept with Kinnarps’ ergonomic workstations offers many advantages, such as accelerated decision-making, by removing any barriers to access. Acoustic measures have been put in place to ensure that work won’t be disrupted by the change in noise levels. The Zurich Campus has been awarded the Gold Rating by the German DGNB System for sustainability, as the highest sustainability standards were met during construction. Just like Kinnarps, Zurich attaches great importance to environmental, economic and social sustainability. This is one of the reasons they selected Kinnarps as a partner on this project.

Communication is key: With 53 meeting rooms, 84 think tanks, 16 collaboration rooms and 33 conference rooms of various sizes, there are numerous possibilities for all forms of communication. Whether for large conferences, the spontaneous exchange of ideas or more in-depth discussion between two or three people. 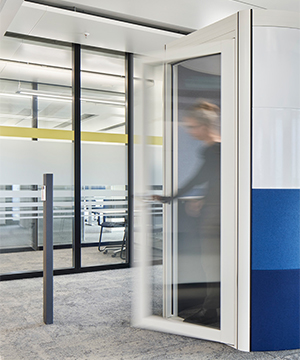 Phone booths with network and power connections allow privacy for undisturbed phone calls with a laptop, without being completely cut off from everyone else.

The employees were closely involved in the development of the building and room concepts right from the start and tested the height-adjustable desks and other products in pilot areas. Meeting rooms with glass walls were also tested. The adjustments flowed directly into the further planning. 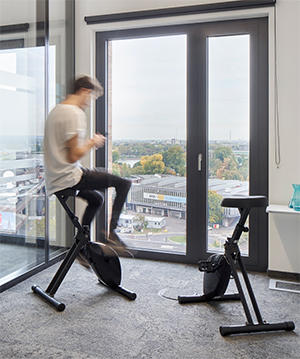 Employee well-being is at the very heart of everything Zurich does. A total of eight health rooms and more than 20 health modules are available. Whether using a bike or a mini trampoline – movement keeps employees fit. And they can recharge their batteries with micro-breaks in comfortable hanging chairs. 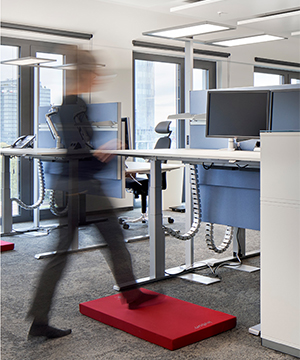 If you want to improve your health in the workplace, “standing up” on Kybun mats is the thing to do. They are distributed across all areas and strengthen all the muscles in the body by simulating walking on sand. And of course, the Plus task chairs can also be individually adjusted.

A special carpet, the acoustically effective partitions between the P series desks and the upholstered seating areas and sofas significantly reduce the volume on the floor, making concentrated work in the open space easy. The arrangement of the desks in a row is also perfectly configured for the reverberation time in the open space. 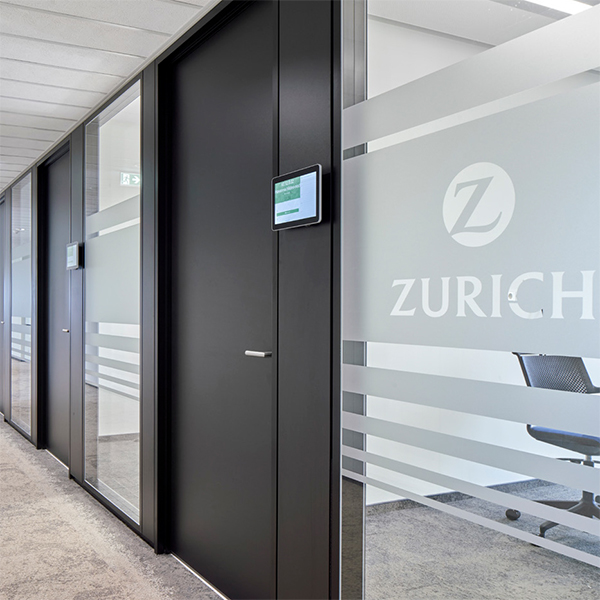 Natural ventilation of the spaces, including state-of-the-art heating and cooling sails under the ceilings, ensure an optimum temperature throughout. Smart lighting generates exactly the right lighting level depending on the time of day And Kinnarps’ height-adjustable desks and Plus task chairs provide perfect ergonomics at every workstation. 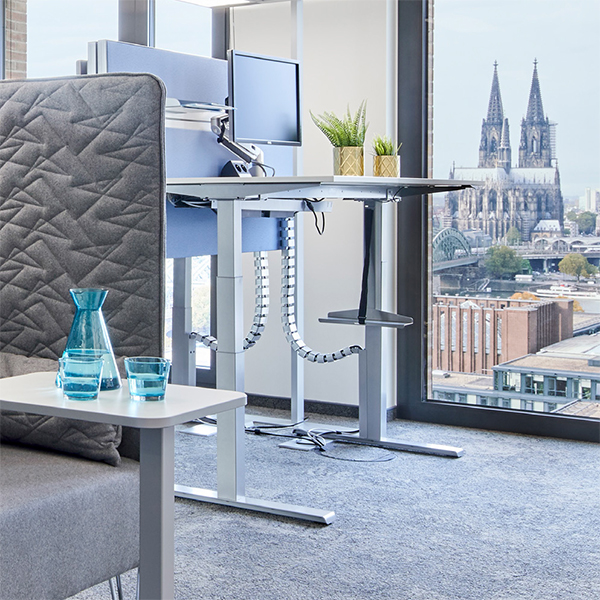 The cathedral is never far from view, whether employees are in a meeting or at their desk. And the view over Cologne is another motivator for employees. 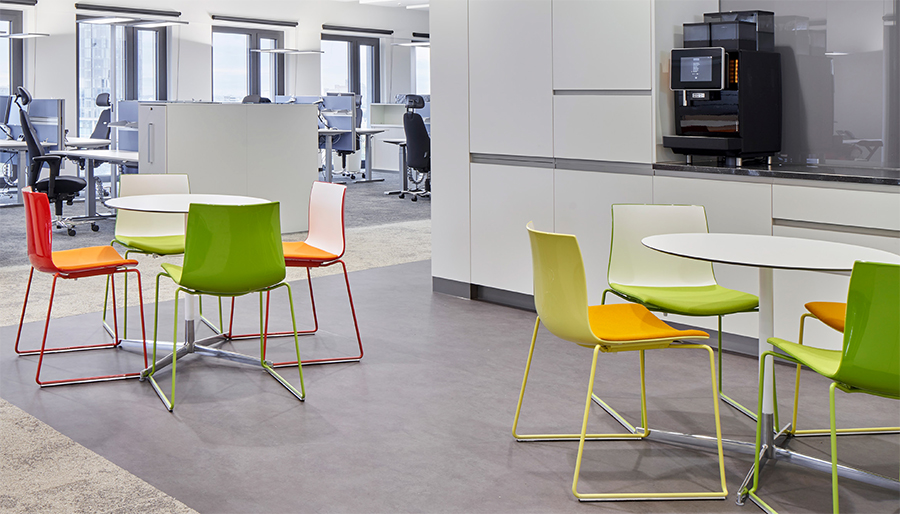 Not only is a good view guaranteed in the space between the exhibition centre and Deutz station, but Zurich also takes care of its employees’ physical well-being. As well as the restaurant and Sky Lounge, there are ‘coffices’ on every floor. The ‘ocean’ naming concept also continues in these café spaces, as they are named after countries bordering each of these oceans. They are all designed differently to match the theme and allow employees to experience a short journey into other worlds. 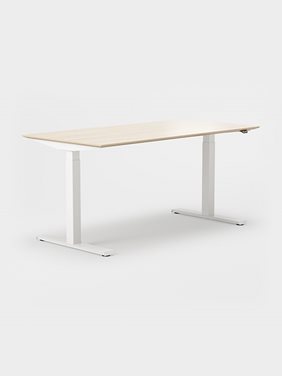 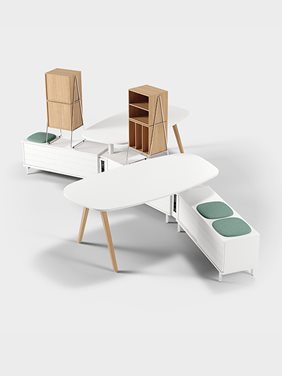 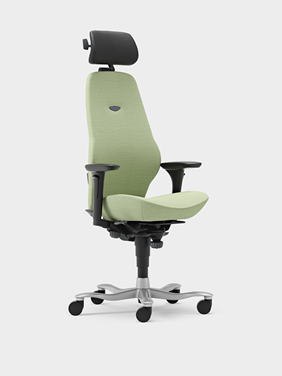 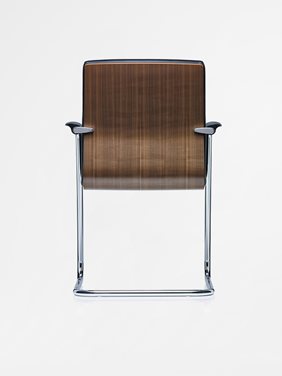 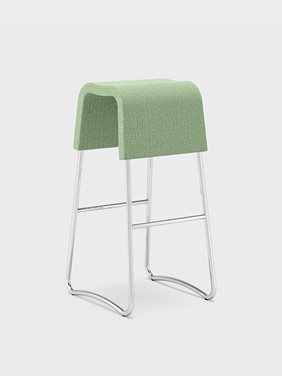